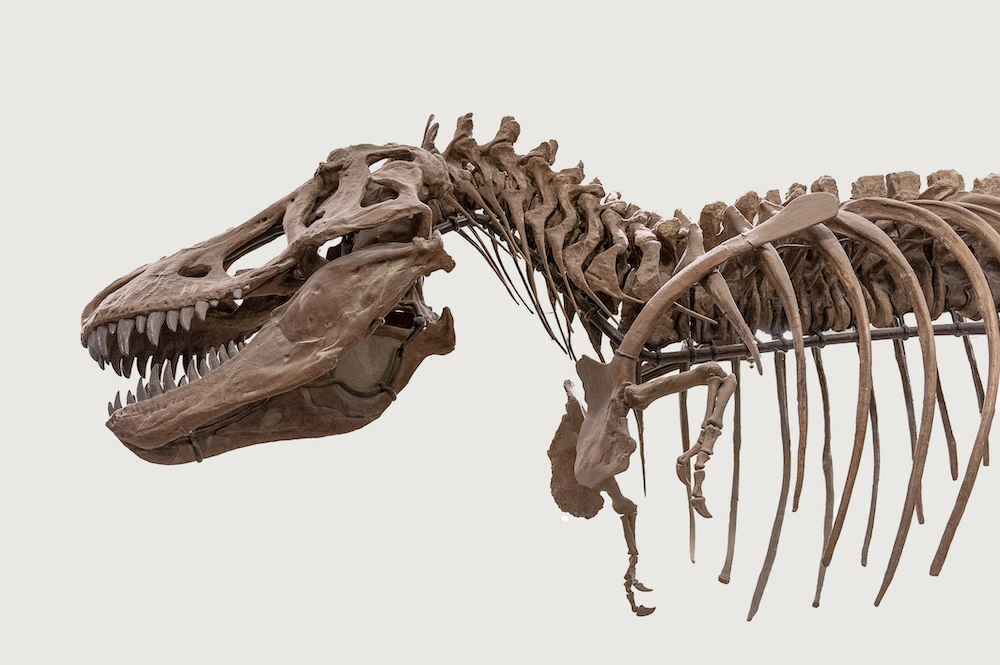 Why were tyrannosaurus rex arms so small?

For decades, the tyrannosaurus rex has been the mascot of all the dinosaurs, and for good reason. They are the most famous therapod dinosaurs of the late Cretaceous, the top predators of their time. Their appearance in the landscape would have sown as much fear in the hearts of their contemporaries as in the viewers of Jurassic Park.

Perhaps their most famous feature – the subject of jokes and memes – are their seemingly useless, stubby arms. Paleontologists have debated the purpose of these weapons, devising countless hypotheses to explain their small size as having an adaptive advantage. Ideas range from grabbing prey to retaining mates, but all of these activities would be better served by larger arms, so the mystery remained.

A recent article published in the journal Acta Palaeontologica Polonica suggests a new explanation. In short, instead of evolving to do something useful, the arms of T. rex could have adapted to avoid being eaten by other rex.

There is evidence that T. rex participated in group feeding events, where multiple individuals descended on a single carcass to eat together. Although it looks like a happy family sitting around the table together, it could have been very competitive, with the potential for intentional or unintentional injuries.

We see similar behaviors in some modern animals. A video that made the rounds on the internet in 2015 shows a crocodile hugging another crocodile’s arm, rolling and pulling the arm away. The incident happened during feeding, so it is unclear if the animal intentionally ate the limb of one of its peers or if it was the result of accidental friendly fire.

If similar events occurred with groups of T. rex when communally feeding, especially if they were common, there would have been selective pressure to reduce the size of the forelimbs to avoid damage.

ancestors of T. rex and other tyrannosaurids had larger arms, so there is a clear evolution in the fossil record showing that some selective pressure caused tyrannosaurid forelimbs to shrink. The risk of injury is quite effective pressing, particularly if the benefits of longer arms are minimal.

The adaptive pressure resulting from the consequences of biting could have negated any present advantage of having longer arms. Bites cause trauma that can lead to infection, shock, and death. The idea is that T. rex the weapons became a burden the animal could no longer afford, so they learned to live without them.

While this explanation for the relatively small arm sizes of tyrannosaurids is appealing, it suffers from some of the same problems as the other explanations, namely the inability for us to test it directly. However, we may be able to find indirect supporting evidence in the fossil record.

There is a famous, possibly apocryphal, story involving statistics of bullet holes in WWII aircraft. Warplanes returned from the battlefield riddled with holes, and leaders were tasked with determining how to reduce their losses. The initial idea was to protect the areas where bullet holes were most frequent. Supposedly, mathematician Abraham Wald flipped the script, suggesting that the areas with the fewest bullet holes were the most vulnerable. After all, planes hit in these areas would not return. This is an interesting lesson in survival bias, but it has some utility in examining T. rex fossils too.

bites from others T. rex are not uncommon in the fossil record. If a fossil analysis shows a reduced number of bites on and around the forelimbs, compared to other areas of the body, this could suggest that limb shortening was a successful evolutionary survival strategy.

Much like WWII airplanes, animals with arms long enough to be severed do not survive evolutionary warfare. Natural selection is a constant cost-benefit analysis and, when it comes to T. rexan arm or a leg is too expensive.