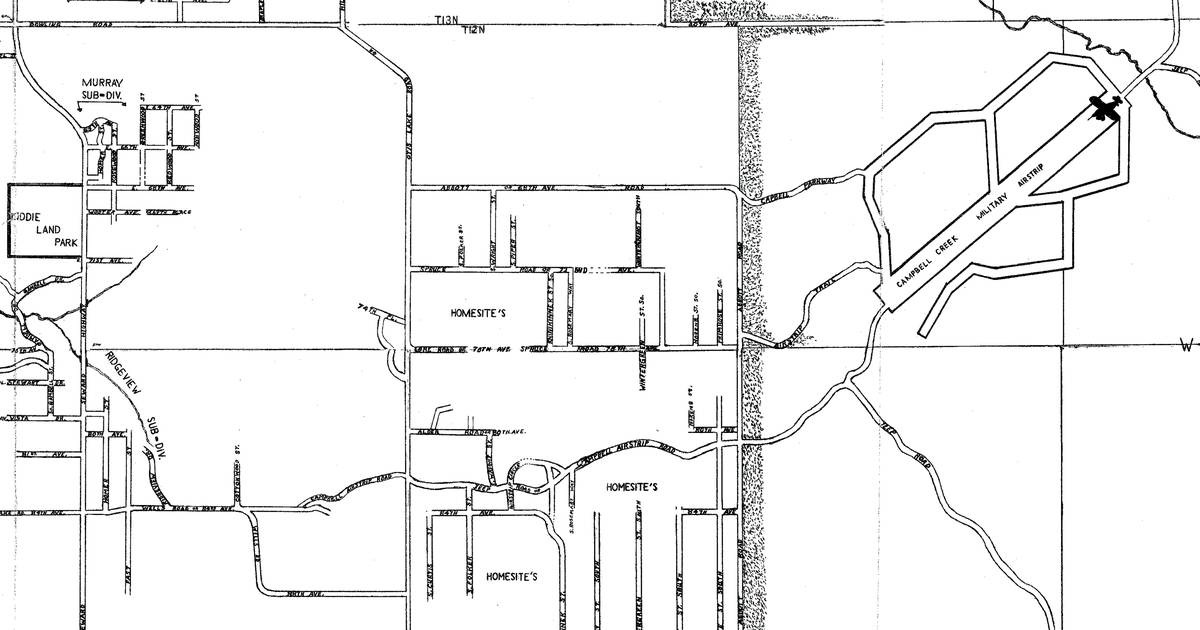 Part of a chase weekly series on local history by local historian David Reamer. Have a question about Anchorage’s history or an idea for a future article? Go to the form at the bottom of this story.

Over the past two years, I’ve answered over 2,000 story questions from readers. Here are some of the most interesting.

When was the first organized bicycle race in Alaskan history?

The first organized bicycle race that I could find evidence of was part of the 1898 July 4 festivities at Skagway. The race was open to all competitors and spanned “the length of the wharf”, presumably meaning the town’s Juneau Wharf which stretched over the water. The first prize was a box of cigars, a bit of old-school Alaska that the Arctic Bicycle Club has yet to attempt to replicate. Four days later, on that same dock, notorious mobster and con artist Jefferson “Soapy” Smith was killed in a shootout.

Why is an area of ​​Anchorage near Abbott Road called Abbott Loop when Abbott Road does not loop?

Road names and even their paths can change significantly over time. Abbott Road was originally a loop on what is now Lake Otis Parkway, then called Otis Lake Road or Hillstrand Boulevard. As seen on a 1954 map of Anchorage, Abbott Road then included parts of what is now East 68th Avenue, Elmore Road, and Abbott Road. This loop contained a neighborhood that became known as the Abbott Loop, a name that lingered decades after the roads were renamed.

A similar local example is Sand Lake Road, which once formed a large U-shaped course around Sand Lake that included what is now Raspberry Road, Sand Lake Road, and Dimond Boulevard. Due to poor city planning and multiple municipal authorities, road names in the Anchorage Bowl were more neglected. Some roads had multiple names depending on who or what agency you asked. And some street names were repeated confusingly. As in, there used to be Susitna Street, Susitna Boulevard and Susitna View Promenade. Likewise, there have been multiple routes named Alder, Darby, Glenn, Maple, and Northwood simultaneously, among other examples.

[Histories of Anchorage: Why isn’t there a J Street? And other reader questions]

Why is there a monument to EG Fenn on the Park Strip?

EG Fenn – real name Elmo though few seemed to call him that – was a city surveyor, a pioneer of surveying in Alaska, and a strong advocate for teaching winter sports in schools. According to a 1977 Anchorage Times article, “Fenn was an early leader of the surveying profession in Alaska. He was instrumental in establishing subdivision regulations in Anchorage and worked on projects such as updating monumentation and defining boundaries within the city.Before Fenn, the rigor of surveys in Anchorage was inconsistent, often to the point of downright carelessness.

He died in a helicopter crash in 1967 while on a survey mission outside Juneau. The monument at West 10th Avenue and I Street was erected in 1977. It cost $3,000, about $14,000 today after accounting for inflation, and was paid for by the Alaska Society of Professional Land Surveyors. Additionally, it was designed as a calibration reference that surveyors could use to align their equipment.

Is it true that Cowanesque Rock at Kennedy Entrance is named after a tanker that hit it? What happened?

On October 17, 1960, early in the morning, the USNS Cowanesque, a T-2 tanker en route to Anchorage with 130,000 barrels of jet fuel and avgas, struck a then uncharted rock south of the tip of the Kenai Peninsula . Eight of the nine tanks on the port side were gutted. The ship was never in danger of sinking, and there are no reports of any injuries to the crew. The captain reported a list of four degrees, but the ship was not taking on water or losing fuel at the end of the day.

The captain of the Cowanesque first prepared to meet USNS Suanmico at Bluff Point north of Kachemak Bay and transfer the rest of the cargo. This plan was quickly rejected given the environmental danger to Homer and Seldovia. Instead, the Cowanesque went west and anchored off Chinitna Bay. Then it met the Suanmico off Kalgin Island, transferred the remaining fuel, and was then towed to Seattle for repair. The Suanmico went to Anchorage for the delivery.

Can you tell me about the restaurant that now housed the Eagle River Nature Center?

His vision was for the lodge to become the “gateway to Chugach State Park.” Naturally, he also wanted to make money, which brought him into conflict with conservationists. In 1971 he applied for a liquor license, but faced opposition from the Sierra Club, the Anchorage Nordic Ski Club and some of its neighbors who feared such a development would negatively affect both the neighborhood and the park.

After an initial rejection, Barclay was granted his license on appeal. However, to be fair to the critics, the opening of the lodge caused immediate parking issues. Additionally, there were noise complaints throughout the 1970s, as the sounds of spinning engines became the norm. Barclay has regularly sponsored races of nearly every form, including motorcycles, cars, ATVs and snowmobiles.

Restaurants are tough operations at best and in better locations than Paradise Haven Lodge. In 1980, he was struggling with unpaid debts. In April 1980, he resold the property to the State. Various sources have the building and five acres selling for between $248,700 and $260,000, or about $850,000 to $900,000 after accounting for inflation.

After the sale, state employees described the building as a poorly maintained wreck. The Eagle River Visitor Center opened on March 29, 1981. In 1996, the state contracted out the operation of the center to a private group, and the site was renamed the Eagle River Nature Center.

In the 1990s there was a new Mercedes dealership just west of Peggy’s restaurant on Fifth Avenue. The concessionaire had only been there for about a year before the buildings were carefully demolished. Why did the dealership move, and why has the land remained empty ever since?

In the spring of 1991, Harold Nye’s Import Center, which was in effect a Mercedes dealership, opened a new location at 1525 East Fifth Avenue, next to Peggy’s Restaurant and across from Merrill Field. Just over a year later, the city bought the land for about $1.8 million, or about $3.5 million after inflation. In September 1992, the Import Center moved its stock to its old location at 821 East Fifth Avenue.

This property at 1525 East Fifth Avenue is directly north of Merrill Field’s north-south trail. For years, pilots, Merrill Field management and the Federal Aviation Administration, or FAA, have complained that the runway needed extra space as a crash room, a safety measure for overtaking. This is why the property remains empty to this day. The city had tried unsuccessfully to buy the land in front of the import center. According to contemporary sources, the FAA and Alaska Department of Transportation would reimburse the cost to the city.

Critics at the time claimed the city overpaid for the property, which was previously valued at less than $1 million. However, the city contracted three independent appraisals which each valued the property at approximately the purchase price.