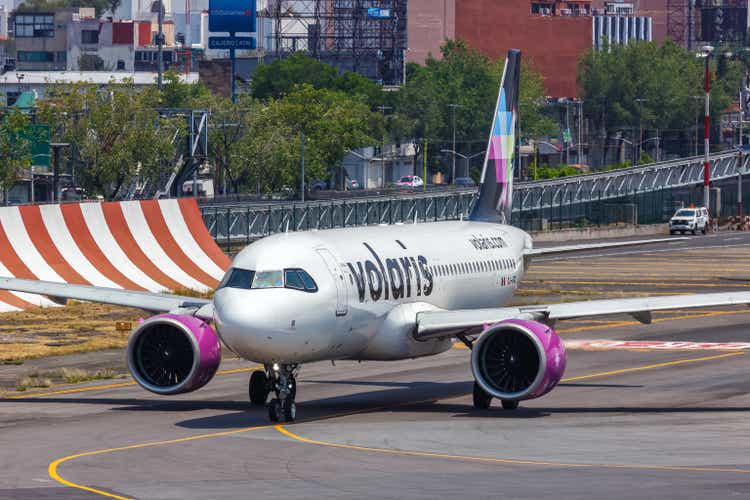 Airline stocks are hot right now, mostly to buy at times to sell, as economic pressures cast doubt on the continued robustness of air travel demand. In the latest earnings releases, we have seen a bullish trend tone among airline executives who believe in countercyclical behavior in air travel demand patterns for at least the coming quarter. In this report, I will analyze the results of Volaris (NYSE: VLRS) showing that even if the growth is strong, the airline seems to encounter certain limits.

From a simple look at the relationship between travel per capita and GDP per capita, there seems to be a lot of growth when comparing countries with similar GDP per capita to Mexico, where Volaris is active. Obviously, a distribution of GDP also plays an important role, but overall Volaris seems to be active in a market that has plenty of room to grow. In addition, almost 50% of the routes operated by Volaris are not in competition with other airlines competing only with luxury bus travel which has seen its market share shrink for several consecutive years.

Among the other airlines, the main competitor and the biggest threat in the future would be Viva, which has reached a merger agreement with Avianca. Volaris’ strength is the low-cost structure that allows it to keep ticket prices low. The company has a cost per available seat mile comparable to Wizz Air, allowing it to offer ticket prices at which many other airlines would no longer be profitable.

Operating revenue rose more than 20%, but none of that trickled down to the bottom line, as costs rose 51.7%. At present, it is not surprising that the reason for the high operating costs of airlines is the high price of fuel. Fuel costs increased 108.2% year over year, due to higher unit fuel costs and higher gallons consumed. The operating margin fell from 24.4% to 4.6%. The decline in operating profit in the current fuel price environment does not worry me. Ideally, with high demand levels, we would like to see operating profit increase, but with high fuel prices, which is unrealistic for most airlines.

What I found somewhat unfortunate was that while most airlines are seeing continued strong growth in TRASM, Volaris is actually seeing a decline in TRASM. Year-over-year capacity addition was 22% and, with stable load factors, should normally result in similar passenger revenue growth. However, during the quarter, this was offset by lower unit revenue. Average base fares fell to $56, marking a 1.8% drop, while ancillary revenue fell 2.5% to $39, marking a 2.1% drop in revenue per passenger to 95 $. This is what I found most disappointing as it could be an indication that for Volaris the days of strong demand driven unit revenue growth are over and it needs to drive prices down to fill airplanes. Analysts had expected higher revenue of $27.6 million. More than half of the shortfall is due to lower average prices.

Was it so bad? The answer is no. While Volaris missed the top line, its earnings per share of $0.30 was strong and CASM-Ex and CASM-Ex Adjusted were also down, showing that the costs Volaris can control and reduce have been reduced.

2022 outlook more or less the same

For 2022, Volaris now expects capacity growth of 25%, compared to 23-25% previously. While maintaining its revenue guide of $2.8 billion to $3.0 billion with EBITDAR margins in the 20s and CapEx in the upper end of the previously forecast $140-145 million. So overall, Volaris is still on track to meet its targets and its CASM-ex growth should actually be 1% instead of the 1-3% previously forecast.

The reality is that fuel prices currently have a significant impact on airline profit and loss statements and there is really nothing airlines can do about this high fuel price environment, apart from seeing where it can pass on costs and operating the most efficient planes. Volaris, with a low unit cost base, is relatively well positioned but even the airline suffers from these higher costs. Somewhat disappointingly, unit revenue declined, raising questions about the robustness of average fares going forward.

In this regard, I consider Volaris a somewhat risky investment, but in the longer term, with strong cost control and under-penetration of air travel in general in Mexico, I think Volaris is one of the airlines which could be very well positioned to benefit from a catch-up in the adoption of air transport in Mexico.