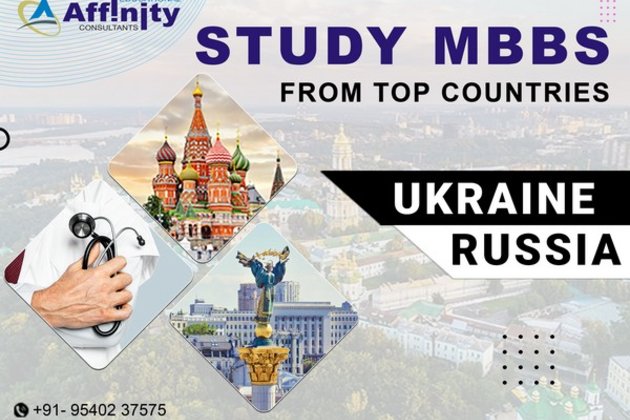 Ukraine and Russia are the main study destinations

New Delhi [India], Aug. 26 (ANI / SRV Media): With the number of MBBS aspirants steadily increasing every year, pursuing MBBS abroad has grown in importance as aspirants face the challenge of a few places in faculties of government medicine and high fees at private colleges in India.

Therefore, Russia and Ukraine, two of the largest countries in Europe, are considered some of the most ideal destinations for MBBS studies, as they welcome international medical students from all over the world, including India. . Statistically, 30% of the best medical universities are in Russia and Ukraine.

On the one hand, Ukraine has been striving to improve the health system of the country since its independence in 1991. The central government of Ukraine constantly provides funds to public medical universities through which MBBS studies are affordable in the country, thus making it a popular study destination.

The country is well known for offering holistic learning through its low cost medical schools as well as the required exposure. There are many medical universities in the country that accept admission without an entrance exam.

On the other hand, Russia is a developed nation and the federal government of the Russian Federation spends considerable sums of its annual budget on education, especially on research and development. Due to the government investment, Russia has many medical universities offering low cost MBBS studies.

In addition, according to international journals, a large number of Russian medical universities are among the top 100 universities in the world. Compared to other countries, Russia holds the position of better quality education with very low cost of living. It has been recorded that a large number of Indian students prefer Russia for their medical studies. There are many reasons for choosing MCI / NMC approved medical universities to study MBBS in Russia.

Some of the reasons Indian students choose MBBS Ukraine and MBBS Russia are: When it comes to studying MBBS in India, the minimum budget is Rs 50 lakhs to study in private medical colleges. On the other hand, students can complete their medical studies within Rs 15-25 lakhs abroad.

These fees may include the overall cost at some universities. In particular, the fees of Ukrainian Medical College are affordable compared to colleges in developed countries.

Internationally Recognized Universities Students from internationally recognized universities in Russia and Ukraine can work in various countries, including India, after passing the mandatory medical screening test.

Special coaching for the best medical license exams Professors at Russian and Ukrainian medical universities also train and guide students in medical license exams like FMGE, USMLE, etc. The best benefits that aspirants can get is that the classes are less crowded, thus ensuring each student individual attention and the opportunity to dispel doubts.

Over the years, countries like Russia and Ukraine have welcomed international medical aspirants. In particular, Indian medical students have been studying in Russian government medical schools since 1980. On the other hand, Ukraine gained independence after its separation from the USSR in 1991, and later opened the door of its medical educational institution to international students. .

To learn more, visit: This story is provided by SRV Media. ANI will not be responsible for the content of this article in any way. (ANI / SRV Media)

FINANCING AT A GLANCE: Duties of a Trustee – What You Need to Know [Column] | Business