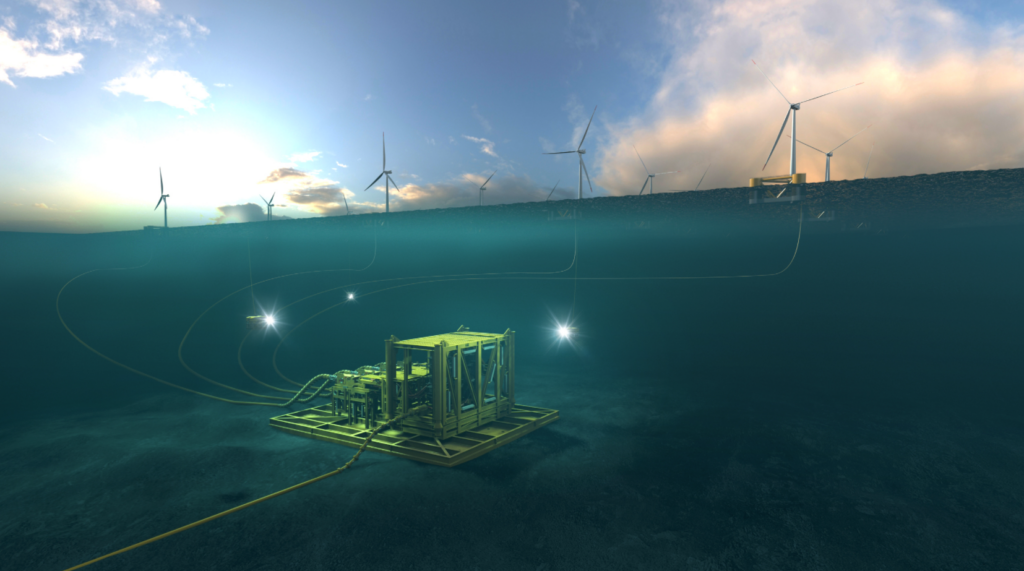 Aker Offshore Wind has presented plans to use offshore wind submarine substations as part of its bids to develop large floating wind farms off the coast of Scotland.

The multi-million dollar subsea innovation would be developed, manufactured and supplied in Scotland by Aker Solutions and would provide significant export opportunities for Scottish companies.

Substations have traditionally been installed above sea level, but moving them to the seabed brings several advantages in terms of reliability and cost, Aker said.

For example, seawater can be used as a natural cooling system, while reliability is increased with stable temperatures, fewer components and no rotating parts.

In addition, operating costs may decrease due to less maintenance and reduced use of materials.

The project would be delivered under the ScotWind licensing process, for which Aker Offshore Wind has partnered with Ocean Winds to submit a series of floating bids that could provide up to 6,000 MW of power in the Outer Moray Firth.

It would be by far the largest wind energy development in the UK and would power millions of homes with renewable energy, the company said.

â€œThis is a world-class innovation that would be developed, manufactured and supplied in Scotlandâ€, Sian lloyd rees, Managing Director of Aker Offshore Wind UK, said.

â€œThe Aker Group and Ocean Winds both have the heritage and experience to do this on a large scale. We know the advantage is there – it will revolutionize the way energy is produced and provide Scotland with the opportunity to export truly innovative technology to the rest of the world. This technology would be supported by tens of millions of investments and work would begin next year. It is a proven technology that we are now using to strengthen the role of renewables in Scotland.

Aker Solutions, a sister company of Aker Offshore Wind, is a pioneer in the development of submarine substations and related electrical system designs. The company would take over the delivery of substations from its Aberdeen facility.

“The development of submarine substations is another major step forward in terms of using the advanced energy technology of our partners, Aker”, Dan Finch, said the Managing Director of Ocean Winds UK.

â€œIt will allow the construction of wind farms in areas of the seabed too deep for the foundations of fixed stations, thus facilitating access to profitable sites around the world, even in very deep water. By including this proposal in our Scotwind offering, we can position Scotland at the forefront of the global offshore wind market, with innovative new technology, offering the economic opportunities associated with a new product with the prospect of global demand.

2 ultra-cheap stocks that are trading below their book value