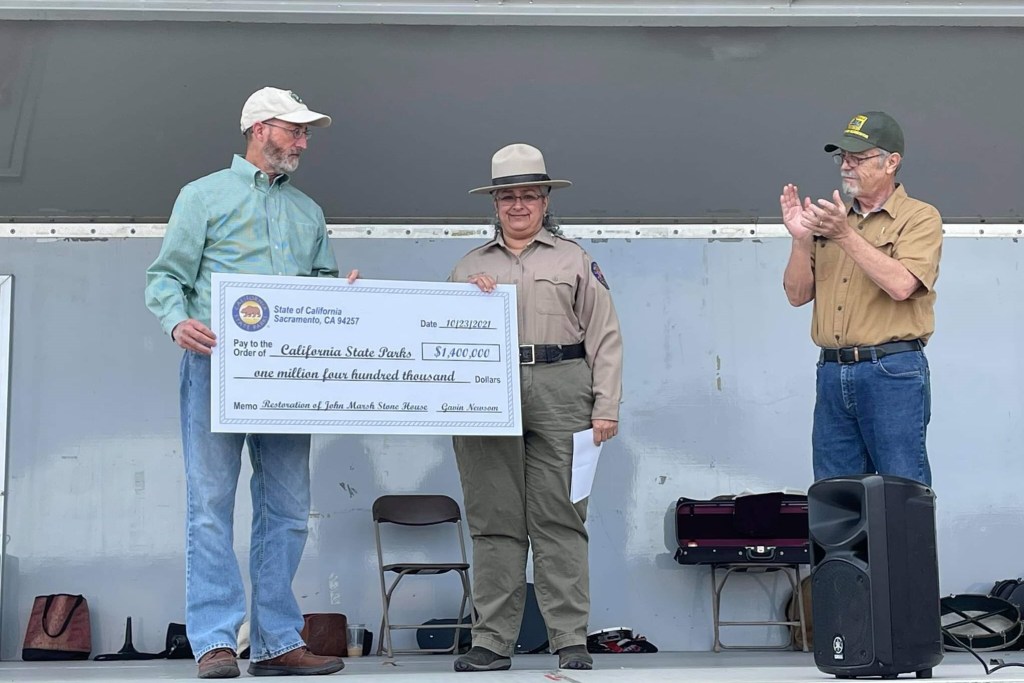 The historic Stone House in Brentwood has just received a major restoration boost through the efforts of volunteers and local politicians. During the annual Heritage Day celebration on October 23, the California State Parks Department received a check from the State of California for $ 1.4 million to help cover the structural restoration of the Marsh House.

“Considering the house’s position in our local history and the rich archaeological composition that surrounds it, the restoration of this treasure will be of enormous benefit to students, nature lovers and history buffs from all over. the area, â€said District 7 state senator Steve Glazer, D. -Orinde.

The money was secured with the help of Glazer, Contra Costa County Supervisors, and the John Marsh Historic Trust, which is run by a local group of history-minded citizens who have for years advocated for the restoration of the Marsh House.

â€œIt was money that Governor Newsom put into the state budget specifically for the house,â€ said Elise McFarland, state park interpretation and education manager. “The money was intended to help pay for Marsh House stabilization efforts.”

The John Marsh House, or Stone House, was originally built in 1855-1856 for Dr. John Marsh. The property is just three miles outside of what is now the town of Brentwood. The Gothic Revival style house, designed by architect Thomas Boyd and unique even for its time, has three floors with a total of 7,000 square feet, including a tower of 144 square feet.

In 1960, the house was owned by Henry Cowell, who donated the Stone House to Contra Costa County. When Cowell originally donated, it was under the agreement that the county would restore the property to its original glory. At that time, the cost was more than the county could afford, especially after an earthquake in the 1970s caused much of the south wall to collapse, exacerbating the building’s structural problems.

The State Parks Department took over ownership of it in 1979. However, they also had problems restoring the house. Fortunately, in 2004 the John Marsh Historic Trust was formed and a major multi-year fundraising effort began. Although the group has managed to raise nearly a million dollars over the years, it still wasn’t enough to help pay for structural problems. In fact, McFarland said that even with the state’s $ 1.4 million, they probably need an additional $ 1.4 million to complete the cost of stabilizing the building’s structure.

â€œThe people who work for the trust have been a great partner,â€ said McFarland. â€œA restoration like this takes a lot of people and a lot of money to accomplish. “

In the meantime, the State Parks Department can get to work on the next steps for the project. The Stone House and its park are not open to the public, except during the annual Heritage Day organized each year in October. Hopefully next year’s visitors will be able to see some of the work being done with the help of state funds.

Investigation of 911 calls: The city of Antioch is asking residents to participate in a survey on emergency 911 calls. The city recognizes that some 911 calls and the city’s non-emergency number do not require an agent. police to respond. The city is working to develop a program to respond to non-emergency calls using â€œwell-trained community respondersâ€.

The Urban Strategies Council is collecting feedback from residents of Antioch who have experience with the 911 system or feedback on how the city responds to non-emergency 911 calls and community needs. This survey aims to understand the needs of the community from the voices of those most affected.

Roni Gehlke can be contacted at oakleynow@comcast.net.