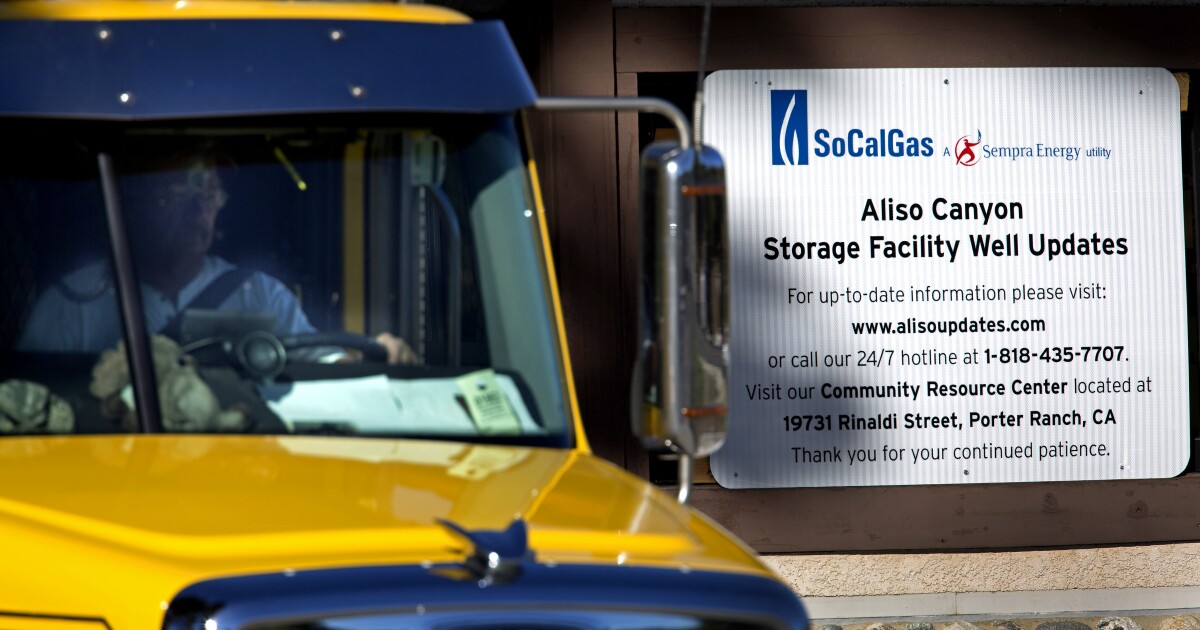 Shareholders of the nation’s largest natural gas utility could be forced to pay nearly $10 million after using customer money to fight public policies that could slow the climate crisis.

California authorities are set to impose the fine on Southern California Gas Co., which sells natural gas to millions of homes and businesses for heating and cooking, and power plant operators for generation of electricity. Fossil fuel is a major source of heat-trapping carbon emissions that have caused worsening heat waves, wildfires, droughts and floods, and are driving many species to extinction.

SoCalGas has embarked on a broad campaign to block clean energy measures that threaten its business model, including local bans on gas hookups in new housing and statewide efforts to encourage the construction of fully electric houses.

The $9.8 million fine was determined by an administrative judge from the California Public Utilities Commission. It discusses a narrow set of actions SoCalGas has taken since May 2018, when the commission ordered the company to stop using customer money to fund its energy efficiency advocacy work — a order that the gas utility allegedly violated.

“Such insolence must be met with a high degree of severity,” administrative judge Valérie Kao wrote in her decision, released Thursday.

SoCalGas now has 30 days to appeal, which would require the five members of the public utilities commission — who are appointed by Gov. Gavin Newsom — to vote on the penalty. If no appeal is lodged, no vote is necessary.

Gas company spokeswoman Christine Detz declined to comment specifically on the fine. The utility has previously denied any wrongdoing, arguing that it watches over consumers by trying to keep energy costs from rising, and that it can play a crucial role in tackling climate change by providing cleaner fuels such as renewable gas and hydrogen.

“We have received the decision and we are reviewing it. We await and look forward to further engagement on this issue,” Detz said in an email.

The proposed fine is well below the $124 million recommended by the Public Advocates Office, an independent arm of the Public Utilities Commission that works to protect taxpayers.

But while climate activists were disappointed the number wasn’t higher, it’s still “really encouraging that the commission shows it understands that sanctions are needed to deter this type of wrongdoing on the part of of SoCalGas,” said Sara Gersen, senior attorney for the nonprofit. Earthjustice law firm whose clients include the Sierra Club.

“These efficiency standards that SoCalGas is fighting tooth and nail are absolutely vital for us to meet our climate goals,” she said.

SoCalGas, a subsidiary of fossil fuel giant Sempra Energy, can spend shareholders’ money however it chooses, such as lobbying against climate rules. But as a state-sanctioned monopoly, it is required to spend taxpayer dollars strictly on programs that benefit taxpayers, such as security upgrades.

California utility companies are allowed to spend taxpayer dollars trying to influence policy as long as they advocate for higher efficiency standards for buildings and appliances. But after the Public Advocates Office discovered that SoCalGas had worked alongside industry trade groups to try to block a federal efficiency standard for gas furnaces, the public utilities commission ordered the company to stop waging any “codes and standards” defense backed by customer money.

SoCalGas has not fully complied, the commission now says, continuing to send taxpayer-funded employees to meetings where state and federal policy was discussed in the months since the May 2018 order.

Climate activists hoped the state would ban gas hookups in new homes and businesses, like dozens of cities that had required or encouraged electric heat pumps and induction cooktops. SoCalGas pushed back, arguing in written comments that the state “should maintain a diverse portfolio of energy options” and seeking to cast doubt on research showing gas stoves and other appliances can spew air pollution. unhealthy in homes.

“They were busy reviving the tobacco industry playbook by denying public health research on the threats associated with the use of their product,” Gersen said.

The gas company defended its efforts, arguing in a regulatory filing that the Office of Public Defenders and the Sierra Club — which joined forces to seek sanctions — were interpreting the commission’s order too broadly barring public-funded defense. taxpayers.

SoCalGas also suggested that the commission would violate the company’s 1st Amendment right to free speech by penalizing it for trying to influence the state’s building code update. State officials eventually encouraged but did not require new buildings to be all-electric.

“This is a clear attempt to punish SoCalGas for expressing views…that are different from those [the Public Advocates Office’s] and the Sierra Club, including on issues such as profitability, customer affordability, and opportunities for the state to meet its longer-term decarbonization goals,” the gas company wrote in another filing.

The company also addressed its efforts to downplay research showing the negative health consequences of gas appliances, writing, “It is in the interest of the public, including the taxpayers of SoCalGas, to have accurate and information on indoor air quality.

The commission was not impressed with the gas company’s defenses.

The agency’s decision says the public service’s arguments as to why it should not be penalized “demonstrate a deep and brazen disrespect for the authority of the Commission”. The company’s conduct “exacerbated its wrongdoing because its failure to comply became a series of violations of the Commission’s authority,” Kao, the administrative judge, wrote.

The vast majority of the fine — $9.6 million — would penalize SoCalGas for “undermining regulatory process,” including the company’s failure to produce information demanded by the Office of Public Defenders. The rest would be a series of lighter penalties for specific violations of the commission’s order requiring the company to cease taxpayer-funded advocacy.

This isn’t the first time SoCalGas has clashed with climate activists and consumer watchdogs over its climate-related stances.

The Office of Public Defenders and the Sierra Club also urged the commission to fine the gas company $255 million for a separate series of taxpayer-funded actions, including efforts to block rules requiring heaters. -more efficient water and furnaces and a defense against local building codes that limit gas connections. A spokesperson for SoCalGas responded that the utility “should not be discouraged from raising concerns about the affordability of the proposed rules that would disproportionately increase costs for our customers.”

“SoCalGas has been and will continue to be a partner in achieving California’s ambitious climate goals,” SoCalGas wrote at the time.

The Public Utilities Commission eventually ordered the gas company to refund some of the money to customers, but declined to issue a fine, let alone $255 million. The Office of Public Defenders and the Sierra Club are appealing this decision.

SoCalGas has also faced criticism for using taxpayer funds to help create a self-proclaimed advocacy group called Californians for Balanced Energy Solutions, which backed the company’s successful campaign to persuade city government officials. and county not to support local gasoline bans. SoCalGas later agreed to charge shareholders for its contributions to the group instead.

Meanwhile, SoCalGas faces continued calls to shut down gas storage fields that critics say threaten the health of nearby communities, including the Aliso Canyon facility in the San Fernando Valley and the installation of Playa del Rey in the Westside of Los Angeles.

Clean energy advocates say Newsom broke a promise to speed up the closure of the Aliso Canyon storage field, which caused a record methane leak in 2015. Just this week, SoCalGas settled a lawsuit stemming from the Aliso Canyon leak agreeing to monitor levels of benzene, a cancer-causing chemical, in the air breathed by Porter Ranch residents.

The Times also reported last year that oil giant Halliburton – which was hired by SoCalGas to bring the Aliso Canyon eruption under control – says key evidence regarding its failure to stop the leak cannot be reviewed by the authorities. State investigators because the only copies were on a single computer stolen from a van.