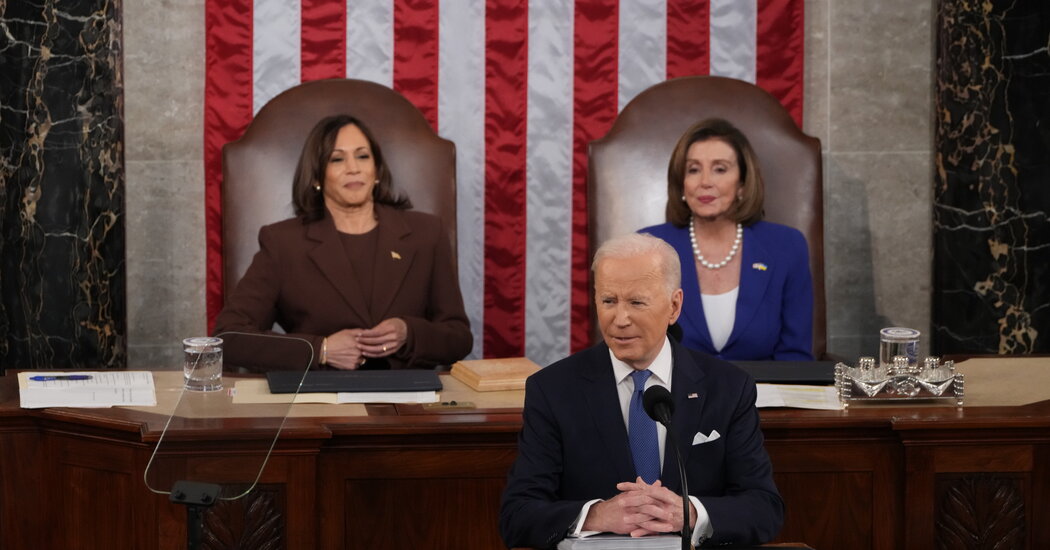 Reviews | Different views of Biden’s State of the Union address

President Biden’s State of the Union address was exactly what the country and the world needed to hear. A very nice tribute to the Ukrainian people. A message of support for them and a defiant stance against Vladimir Putin. Strong words affirming our role as a world leader in the fight against tyranny. The waving of blue and yellow flags. Yes, it made me so proud.

And then Mr. Biden spoke to the soul of the nation. To those recovering from Covid and to those with the empty chair at the table. He talked about the rising costs of putting food on the table and filling the gas tank, women’s rights, the long and distinguished career of Judge Stephen Breyer and the woman he chose to occupy his seat, a cure for cancer and the wonderful young boy who struggles with childhood diabetes and the cost of his medication.

He outlined the infrastructure plans that hold out hope for a better and safer America. He promised help for our veterans and their debilitating and often fatal illnesses. He talked about the essence of what America is and what we can become.

Yes, it was a wonderful address, a wonderful tale of the state of the union, with hopes and plans that can improve the lives of all of us. He was a real Biden, honest and filled with the spirit and conviction that makes people believe in a better future. If only …

While President Biden is to be commended for his success in bringing the Western alliance together in his response to Russian aggression, I found the tone of his remarks during the State of the Union address regrettable.

While we all feel inspired to applaud the heroic spirit of Ukrainians, now is not the time to taunt an adversary who has threatened to use nuclear weapons and may in fact be mentally unstable.

The fundamental danger is that Mr. Biden’s statements will fuel Vladimir Putin’s pathological sense of victimhood in the face of a hostile West. This war is quite tragic for both Russians and Ukrainians; it’s not a football match.

It would be much more appropriate to recognize the suffering of ordinary Russians in the face of economic sanctions and of young Russian soldiers who had no desire to participate – and die – in this conflict.

The United States should also remind Mr. Putin that we are prepared to negotiate any serious security concerns from Russia once the aggression ends. Mr. Biden may have appreciated the standing ovations, but we might find there’s not much to celebrate in the days and weeks ahead.

“Remember that not all Russians are bad people”

The February 26 front-page photo of a Russian soldier lying dead in the snow in Ukraine is very sad. Certainly, he was threatening the lives of peaceful people in a sovereign country. But he was also a son, a grandson, maybe a father or a brother. This young man is as much a victim of the deranged mind of Vladimir Putin as are the hundreds (perhaps soon thousands) of Ukrainian dead.

When Covid first hit, people blamed Chinese students, businesses and Chinese Americans for Covid – even though they had nothing to do with it. We did the same with the Japanese living in America when Pearl Harbor happened, and now we’re going to do it with the Russians living in America.

Anti-Russian sentiment is growing in America. Some Americans are beginning to treat them as if they were responsible for the war in Ukraine. Americans need to remember that there are good Russians standing up to Mr. Putin, who is sending aid to Ukraine.

We must remain united with Ukraine and do all we can to help. I encourage others to get involved and remember that not all Russians are bad people, especially those who speak out against war.

Russell Taub
Wyckoff, New Jersey
The author is a political and political strategist.

Re “Switzerland says it will freeze Russian assets, setting aside a tradition of neutrality” (news article, nytimes.com, February 28):

As an American expat now living in Switzerland, I was genuinely surprised by President Ignazio Cassis’s decision to freeze the assets of Vladimir Putin, his oligarchs and other Russians in the banks of that country, a decision that breaks a long tradition of Swiss military and financial neutrality in the conflicts of other nations. Surprised and absolutely delighted.

There should be no safe or neutral haven for the wealth amassed by such evil actors at the expense of so many people, especially now, when Russian missiles are raining down on independent Ukraine.

As the mother of a trans girl, all I can say is that Governor Greg Abbott of Texas should mind his own business. We may not understand these issues, but if we love and accept our children, fewer of them will live under bridges and commit suicide.