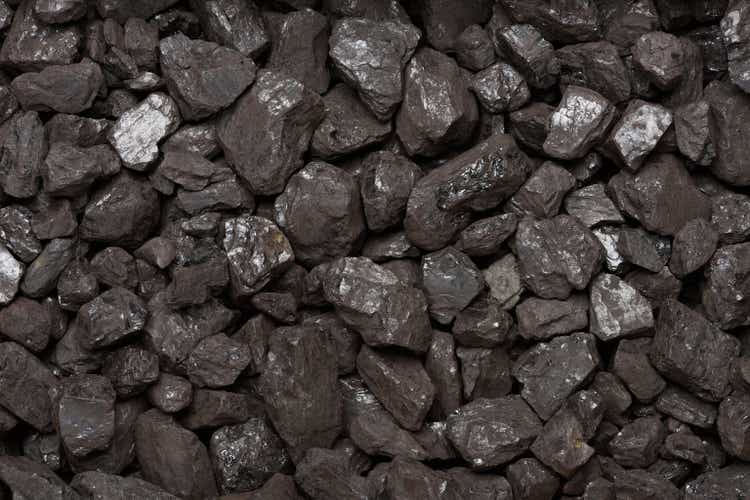 Ramaco Resources: 2022 will be a banner year for the company (NASDAQ:METC)

Ramaco Resources (METC) is a metallurgical coal producer in the United States. I was initially attracted to this company as a call option on the price of metallurgical coal, as I liked Ramaco’s low cost of operations and very healthy balance sheet. While the met price of coal is taking off

As you can see in the image above, Ramaco began to see an acceleration in the price of coal received in the last quarter as metallurgical coal prices started to rise in the second half. As Ramaco had pre-sold the vast majority of its planned production at lower prices, the company did not take full advantage of higher coal prices, but that will change this year, as I will explain later.

Total fourth quarter revenue was nearly $88 million, resulting in operating profit of $22.5 million. Net income during the quarter was $18.6 million on EPS of $0.42 per share. This brings annual EPS to $0.90. A very satisfying result, especially when you consider that the average revenue per ton was only $108.

In my previous articles on Ramaco, I focused on cash flow because I wanted to determine how “safe” senior notes were. Looking at the free cash flow result for the full year, I’m quite satisfied.

Total capex was just under $30 million, resulting in a free cash flow result of $39 million. The majority of this free cash flow was used to acquire the assets of Amonate, and Ramaco continues to grow its asset base by also announcing the acquisition of Ramaco Coal.

Ramaco Coal’s main asset is coal land royalties and the majority of Ramaco Coal land is actually leased to Ramaco Resources. Ramaco believes the merger of operations will have a positive impact on Ramaco’s financial results as royalty payments will be eliminated.

Ramaco Coal will be acquired for a total of $65m of which $5m is payable immediately while Ramaco Resources will be required to make four quarterly payments of $5m this year and four quarterly payments of $10m per quarter next year . Well balanced structure and flexible payment terms and although Ramaco Resources and Ramaco Coal both have the same CEO, and I would like to see more details. What we do know is that in 2020, with an average coal price of $85/t, Ramaco Coal received $4.5M in royalties (according to the 2020 annual report). Given today’s high coal prices, it’s easy to see that Ramaco owes Ramaco Coal $15-20 million in royalties, so a price of $65 million doesn’t seem like a stretch.

You should care more about what 2022 will bring

While Ramaco’s results in 2021 were decent, it is important to focus on 2022 as it will be a year when Ramaco produces and sells almost 50% more coal at a price that will likely be twice as high as in 2021. The tips below allow us to fine-tune expectations.

So, assuming a production of 3 million tonnes of metallurgical coal at a cost of production of $90/t (the highest forecast value) and a revenue of $200/t, this would give $330 million in cash flow. net operating cash.

After deducting overhead, depreciation, and interest, pre-tax income would be $266 million, giving net income of $200 million using the high end of the 25% tax rate. . In my November article, I already expected to see $200 million in free cash flow this year, so it’s good to see the official forecast now confirming my preliminary expectations.

Spread over 44.1 million shares outstanding, this represents EPS of $4.50.

I think an average $200 FOB/FOR mine may even be a bit conservative. The company has already pre-sold 1.8 million tons at $187/t and added 0.5 million tons at $270/t after the end of fiscal 2021. This means that approximately 2.3 million tons on the 3 million tonnes have already been pre-sold at an average price of $206/t. I think my EPS forecast is quite realistic and that means Ramaco is currently trading at around 3x earnings.

I am very surprised to see the market’s reaction to Ramaco’s results. The decline is not warranted at all and the only reason I can think of is that the market could be overwhelmed by Q4 and FY 2021 results. This is not a surprise as Ramaco tends to selling the majority of its production a year before delivering them, meaning it will only begin to see the impact of much higher coking coal prices in the current fiscal year.

I expect EPS of at least $4.50 for this year, while reported free cash flow will likely be around $3.5-3.75/share, and that includes growth investments that will be spent on the Elk Creek mine as part of a production expansion. program.

I currently have no position in Ramaco Resources, but have written put options which are currently out of the money. I also own the 9% Senior Notes traded as (METCL) on the exchange. These notes are redeemable in the summer of 2023 and I now expect Ramaco to call them back next year as the balance sheet will be flooded with cash.