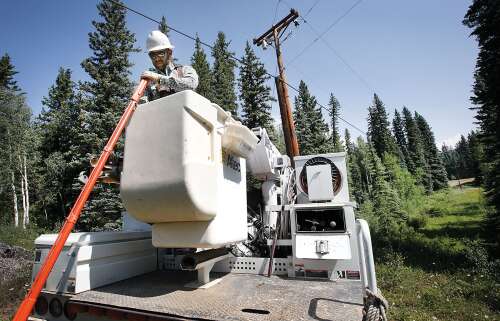 The La Plata Electric Association board voted unanimously on Wednesday to move forward with finalizing efforts to buy out its contract with Tri-State Generation and Transmission Association, and receive half of the megawatts needed to serve its members of Crossover Energy Partners.

“This is a groundbreaking partnership that delivers significantly greener energy at a lower cost while delivering the reliability our members have come to expect,” said LPEA Board Chairman John Witchel. “I am incredibly proud of the LPEA team and the extraordinary results their hard work has brought to our community. I hope other rural electric co-ops across the country will follow our example towards a more sustainable and resilient future.

The new contracts with Crossover stem from LPEA’s decision in 2018 to try to reduce its carbon footprint by 50% by 2030. Since 2019, LPEA has sought to modify its 50-year contract with Tri-State in order to to provide its members with cost-effective, low-carbon energy.

“I think it’s a monumental partnership, because we had some really tough conversations with Tri-State at the start, and with their board of directors,” said LPEA CEO Jessica Matlock.

According to the LPEA, contracting half of its electricity to Tri-State and the other half to Crossover would allow the cooperative to meet its carbon footprint reduction goals six to seven years earlier than expected and could save about $7 million a year.

“This community wants renewable, green energy, and this agreement allows us to reach our renewable energy goals faster than we otherwise could,” Witchel said.

The LPEA Board will continue discussions on how to pass on the anticipated cost savings to members. Options include rate reductions, deferring future rate increases, increasing capital credits to members, or increasing funding for capital construction or fire mitigation projects to improve the service reliability.

A finalized buyout payment from the contract with Tri-State is still being negotiated with the Federal Energy Regulatory Commission.

“We found a mutual benefit between us and Tri-State and now we’re going to partner together to try to get FERC to make a final decision,” Matlock said.

LPEA spokeswoman Hillary Knox said the completion of the buyout agreement with FERC is expected to end as early as 2023. Knox also said LPEA does not expect to begin accepting power from Crossover until 2024.

“It’s quite a process to finalize the power supply contracts with Crossover and Tri-State,” she said. “It takes time to get things done and to get our next-generation factories up and running.

Knox said it’s likely the LPEA won’t begin to see savings associated with its Crossover contract until a year after services begin, likely in 2025.

Although it will likely be a few years before the LPEA starts accepting Crossover energy, Witchel said this deal is moving pretty quickly for the energy world.

“The world of energy is inherently a slow-moving world, because you can’t just build solar farms and dismantle coal-fired power plants overnight,” he said. “The most important thing is to keep the lights on. The idea that we are going to go from a signed contract in the next two months to benefiting members in a year and a half is, in my mind, lightning speed.

Is this king of high-yield dividends a buy?