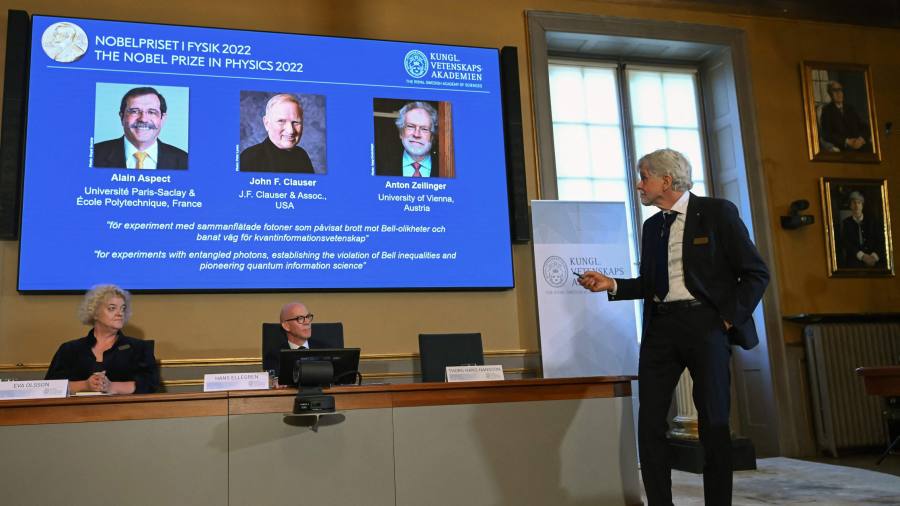 Three scientists in their 60s have won the Nobel Prize in Physics for translating the bizarre theoretical predictions of quantum theory into the foundations of practical quantum information and communications technology.

Alain Aspect from France, John Clauser from the United States and Anton Zeilinger from Austria will share the SKr 10 million ($916,000) prize for “demonstrating the potential for investigation and control of particles found in “entangled states,” the Royal Swedish Academy of Sciences said.

When two particles are “entangled” – the scientific term for quantum bonding – what happens to one of the pairs has an instant effect on the other, no matter how far apart they are.

Zeilinger, 77, who works at the University of Vienna, said after hearing his award: “The beauty of entanglement is that you can transfer the information carried by an object to another place where the object is reconstituted”.

This instantaneous transfer of information is often called teleportation, but Zeilinger said people shouldn’t confuse it with the teleportation of large solid objects, as happens in science fiction movies such as star trek.

Teleportation experiments so far have used light particles called photons, which have enabled quantum communications over a 7,600 km satellite link between China and Austria.

One of the earliest applications of quantum technology is cryptography. If someone intercepts an encrypted quantum message, the entanglement is lost. The technology is also at the heart of ultra-powerful quantum computers currently being developed in laboratories around the world.

“This award is an encouragement for young people,” said Zeilinger. “The award would not be possible without the over 100 young people who have worked with me over the years.”

Aspect, 75, works at the University of Paris-Saclay and the École polytechnique de Palaiseau, while Clauser, 79, runs his own business in California.