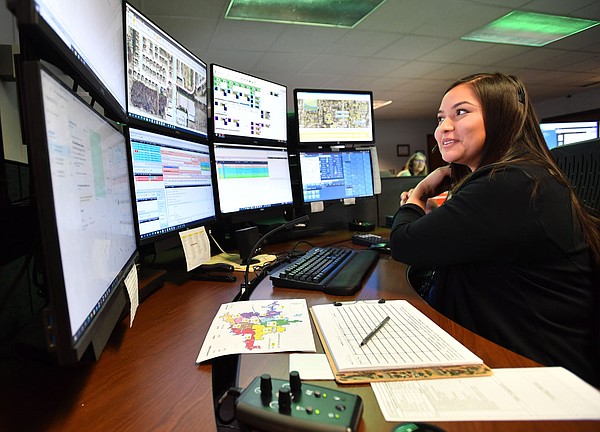 FAYETTEVILLE — City dispatchers have continued to respond to calls and get emergency responders to where they need to be in a timely manner, but it’s been more difficult than usual, according to the police chief.

The city’s dispatch center experienced high turnover last year. Thirteen of 25 employees quit during the year, prompting supervisors to use the radio, light constables to help verify information and dispatchers to work overtime, Police Chief Mike Reynolds said. The city council approved an additional position for the dispatch center in this year’s budget, and now 20 of the 26 positions are filled, he said.

Administrators want to keep the dispatch center employees they have and attract qualified candidates. To do so, the board will consider Tuesday approving a retention program totaling $69,576. The request is on the council consent agenda, which means it will pass without discussion unless a council member objects.

The package includes an additional $1.50 per hour for dispatchers who work from 2 p.m. to 6 a.m. Dispatchers who train colleagues or who are bilingual would each get a 2% increase.

The pay range for a city dispatcher is $17.84 to $26.65 per hour. The council separately has a 5% increase in the pay structure for citywide employees on its agenda Tuesday and, if approved, would increase the pay range for dispatchers from $18.73 to 27, $99 an hour, starting April 4, according to Missy Cole, the city’s director of human resources.

Reynolds said he thinks dispatchers have the toughest job when it comes to public safety.

It takes at least six months to train a dispatcher, and the job involves answering calls, knowing how to properly handle each call and what priority it should get, and entering information correctly, Reynolds said. Call volume increased 12% in the past two years with the onset of the pandemic, and last year the center received 155,000 calls, including 46,000 for emergencies, he said. .

More than 33 million Americans have quit their jobs since last spring, according to a January article by National Public Radio. Many workers retired early, and low-wage earners sought better wages and amenities.

At the same time, the unemployment rate in the Fayetteville-Springdale-Rogers metro area is 1.6%, according to the US Bureau of Labor Statistics. That not only means it’s hard to keep employees, but it’s also hard to find qualified candidates, Reynolds said.

“My concern is that if you don’t control that turnover rate and you don’t retain the valuable employees that you have, then we’re going to end up in a situation where we’re going to have to come up with something different, “, said Reynolds.

“What’s happening now is we think it’s Christmas because we had an application,” she said. “We will go a week or more without a single application.”

The center can’t hire just anyone, Stocker said. Applicants must pass a typing and writing test and pass interviews and a background check. Often a candidate who goes through the process seemingly disappears, she said.

Supervisors work weekends and do what they can to reduce employee overtime, Stocker said. Employees understand the responsibility of the job, and supervisors make sure no one gets into a situation where they can’t do the job, she said.

“It was a challenge,” Stocker said. “Everyone here, they all understand what’s going on, and they’re dedicated people. It’s very interesting work, and it takes a special person to be able to do it.”

Other municipalities in northwest Arkansas are struggling to keep their dispatch workforces busy, though the disparities vary.

Fort Smith has all five dispatch supervisor positions filled, with 16 of the 24 telecommunication carrier positions filled. Dispatchers can earn between $15.54 and $24.83 per hour depending on experience. Entry-level hires automatically increase to $16.55 an hour after one year of satisfactory service, according to Police Department Capt. Wes Milam.

“We actively seek qualified candidates, but like all other agencies, we also struggle to find quality candidates,” Taylor said.

Rogers has 24 dispatch positions, of which 17 are filled. The starting salary is $17.42 an hour, although experienced applicants can earn more, said Mark Baughman, communications coordinator at the city’s dispatch center.

Dispatchers are responding to the city’s needs with a new center that recently opened with money from a voter-approved bond issue in 2018, he said. However, vacancies put additional pressure on employees, he said.

“Recruitment and retention seems like a national issue from what I see,” Baughman said. “I would say it can be even more pronounced in northwest Arkansas because we have to compete with the big businesses in the area. A 911 carrier is a very technical job. If it’s not in the blood from the dispatcher and not becoming a ‘caller’, they can usually find a better paying job, as I have seen many times.”

Bentonville has 22 dispatch stations in total, three of which are open. However, two candidates are being hired, said Ed Wheeler, the city’s director of human resources.

The Washington County dispatch center has 14 of the 20 positions filled. The county has had as many as nine vacancies recently, Chief Deputy Jay Cantrell said. Dispatchers start at $16.97 per hour.

“We struggle to cover shifts and current employees have to work so much overtime that stress and burnout are a big concern,” he said. “It’s a highly specialized profession, and it can take six to eight months to train a new person.”

Benton County dispatchers start at $19 an hour, and the center has 25 of the 37 positions filled. Even when the center receives applications to fill vacancies, often the person does not show up for tests or interviews, said Jennifer Persons, director.

“We have enough staff to cover all of our 24/7 minimum staffing needs, but we need to increase that from the bare minimum,” she said. “For the past two years, the fight against covid has been our sworn enemy.”

All but one of Sebastian County’s 11 dispatch center positions are filled. The starting salary is $14.53 per hour.

The center has won two additional positions this year and the retention rate is high, although fewer applications have generally come in lately with vacancies compared to a few years ago, said JoBeth Harris, director of communications for the center. county distribution.

Lorrie May, a 9-1-1 dispatcher with the Fayetteville Police Department, speaks Friday, March 11, 2022 to emergency crews as they respond to a small fire in the city while working at a office inside the department station in downtown Fayetteville. The city’s dispatch center is asking city council for a budget adjustment of $69,576 to help retain employees. The center had a turnover of 52% last year and currently has six openings. Visit nwaonline.com/220313Daily/ for today’s photo gallery. (NWA Democrat-Gazette/Andy Shupe)

Fayetteville Police Department dispatchers work Friday, March 11, 2022, inside the department station in downtown Fayetteville. The city’s dispatch center is asking city council for a budget adjustment of $69,576 to help retain employees. The center had a turnover of 52% last year and currently has six openings. Visit nwaonline.com/220313Daily/ for today’s photo gallery. (NWA Democrat-Gazette/Andy Shupe)

Fayetteville City Council will consider a budget adjustment to retain dispatchers. The cost breakdown is as follows:

A boon for exporters on weak peso seen – Manila Bulletin