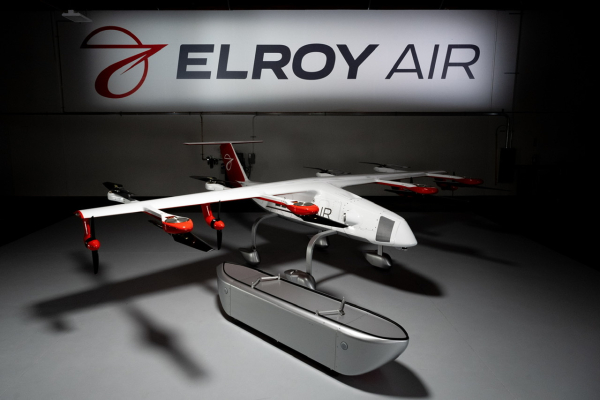 Elroy Air, a company developing the first end-to-end vertical take-off and landing (VTOL) autonomous air cargo system, has unveiled its pre-production Chaparral aircraft. The Chaparral can autonomously pick up 300 to 500 pounds of cargo and deliver it by air up to 300 miles, a capability that goes beyond the limited payload capabilities of delivery drones and the airport infrastructure required to piloted air cargo options available today.

The company has secured agreements for more than 500 aircraft from commercial, defense and humanitarian customers representing over $1 billion in aircraft demand.

Mesa Airlines, a US regional airline operating large fleets on behalf of partners such as American Airlines, United Airlines and DHL, intends to order 150 aircraft to serve the express parcel and healthcare sectors.

Elroy Air received a Tactical Funding Augmentation Award (TACFI) from the United States Air Force in Q4 2021 of an additional $1.7 million in contract value in addition to its existing SBIR Phase 3 contract. The funding will be used to further develop deployment details and CONOPS in conjunction with partners Air Force and Agility Prime. It reflects the continued enthusiasm of the Air Force and AFWERX to help accelerate the Chaparral until it is ready for use by the organization.

AYR Logistics, an aircraft owner and operator with over 20 years of experience providing logistics support to the humanitarian community in over 45 countries, including the United Nations, World Food Program (WFP), governments and NGO, has signed an agreement with Elroy Air to purchase up to 100 Chaparral aircraft to increase and develop its humanitarian logistics activity.

What aid agencies spend on transport is money they don’t spend on food, medicine and other emergency supplies, but transport is obviously very important in getting aid to where it needs to be. must be. Moving to unmanned air cargo vehicles will make a huge difference to our cost structure and the risk profile of our operations. We fly in difficult terrain and in difficult conditions. We don’t always have the luxury of having a track or even staff at certain locations. There simply hasn’t been a UAV with the kind of capabilities that the Chaparral has in commercial markets. The Chaparral is a leap forward in terms of load carrying and range, while still being able to operate with minimal infrastructure.

The Chaparral is a transitional “lift + cruise” VTOL aircraft with a full carbon composite airframe and turbine-electric hybrid powertrain for long-range mission capabilities. It was also designed to fit in a 40ft shipping container or C-130 cargo plane, allowing it to be quickly shipped and deployed anywhere in the world.

Elroy Air has developed lightweight and aerodynamic modular cargo pods that can be pre-loaded by ground personnel and retrieved by the aircraft before take-off. At the delivery location, the cargo pod is lowered to the ground and released after the system lands. The Chaparral system can pick up another pre-packaged pod and transport the pod to its next destination, creating a two-way conveyor belt across the sky.