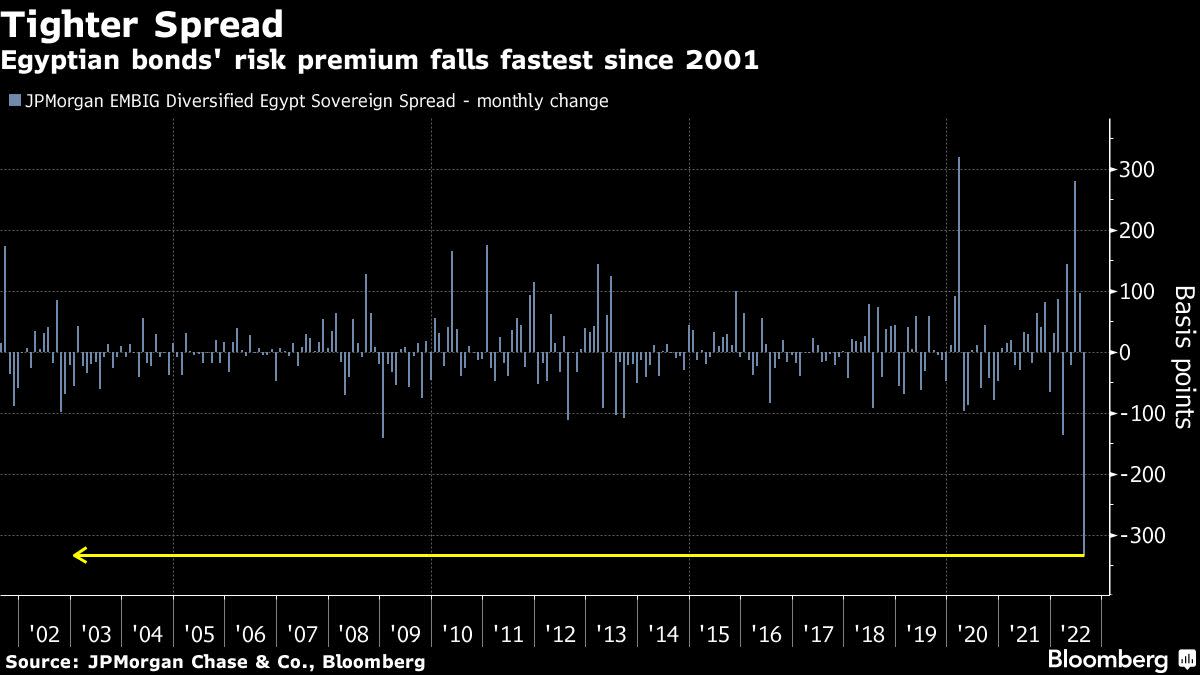 (Bloomberg) — An already turbulent year for emerging market traders is getting a new dose of adrenaline as Egypt battles to avoid a debt crisis.

The North African nation has become the latest symbol of the plight of poorer nations due to soaring inflation, rising yields and crushing global growth. Investors, still reeling from recent defaults by Russia and Sri Lanka, are looking to Egypt as a case study in assessing whether – and how quickly – the wider developing world can avoid a crisis of large-scale debt and navigate the coming era of tighter credit conditions.

The turmoil is all too visible in Egypt’s assets. The likelihood of his government failing to repay debt within the year has risen to its highest level since 2013, and the worst in the region, according to a Bloomberg model. That sent the extra yield demanded by investors to buy Egyptian bonds rather than Treasuries above 1,200 basis points for the first time, before facing the biggest drop in more than two decades. according to data from JPMorgan Chase & Co. The pound has fallen to its lowest since the surprise devaluation in 2016.

It’s hard to ignore some signs of stability that have emerged for the country this month, with a new central bank chief seen as a decisive reason for optimism alongside ongoing talks with the International Monetary Fund. Yet fears that the Arab world’s most populous nation will fail to service its debt will remain on investors’ minds until it is clear that Egypt will devalue its currency and an IMF package will be large enough to fill its funding gap.

“To avoid a default, Egypt will need additional external support, especially in the context of a bloated current account deficit and weak capital inflows,” said Callee Davis, an economist at Oxford Economics Africa. “If Egypt is unable to obtain further external financing, the risk of a default will increase significantly.”

It’s been a rat race for investors, as evidenced by the cost of insuring the country’s bonds. The gauge remains high – hitting a record 1,500 basis points last month, before moderating to around 940 basis points for the week ended August 26, still higher than struggling Turkey and Angola.

The pain felt by heavily indebted countries – like Egypt, whose debt-to-gross domestic product ratio stands at around 94% – cannot be ignored. Egypt has more than $5 billion in dollar and euro-denominated securities maturing in the fourth quarter and another $9 billion maturing in 2023, according to data compiled by Bloomberg.

All these reasons lead investors to weigh the risk that Egypt will follow in the footsteps of Russia and Sri Lanka. The South Asian nation was the first to stop paying its foreign bondholders this year, weighed down by high food and fuel costs that have fueled protests and political chaos. Then Russia followed in June after being caught in a web of sanctions.

IMF support could make the difference – something investors keen on the region point out, alongside the country’s foreign exchange reserves. While the central bank’s net international reserves fell to $33.14 billion in July, they are still sufficient to fund Egypt’s current account deficit and external debt in the short term, investors said. Moody’s Investors Service expects reserves to stabilize and gradually increase on the back of rising non-energy exports and a recovery in foreign inflows.

The IMF has been a crucial player in emerging markets this year. Pakistan is awaiting $1.2 billion in funding following the fund’s board meeting on August 29. With IMF officials in Colombo for talks until the end of this month, Sri Lanka’s central bank governor expects the funds to be disbursed by the end of the year.

“Egypt is not Sri Lanka – it has much higher reserve reserves and much better funding options going forward,” said Matthew Vogel, London-based portfolio manager and head of research. sovereign at FIM Partners. “Egypt’s problem is manageable with tougher policies and support from official creditors.”

A major food importer, Egypt has struggled to cope with soaring grain prices fueled by Russia’s invasion of Ukraine. Saudi Arabia and Egypt’s other wealthy Gulf Arab allies have together pledged more than $22 billion in deposits and investments to shore up the economy of a country seen as the backbone of the Arab world.

Just days after a central bank leadership reshuffle, Egypt’s prime minister said on August 22 that the country was close to reaching an agreement with the IMF on a new loan. Veteran financier Hassan Abdalla is now acting central bank chief, replacing Tarek Amer, who was seen as supportive of a stable pound.

As the IMF favors a more flexible exchange rate, talk of further currency devaluation pushed the pound to its lowest since December 2016 in the offshore market last week. Even after its roughly 15% devaluation in March, analysts believe the currency still needs to fall further to reduce Egypt’s funding gap.

“The IMF is not a deal breaker default scenario,” said Todd Schubert, head of fixed income research at Bank of Singapore. “On the contrary, it would build confidence and be a catalyst for further price increases to the point that when the emerging market market opens up, they could eventually tap offshore dollar bond markets.”

What to watch this week: