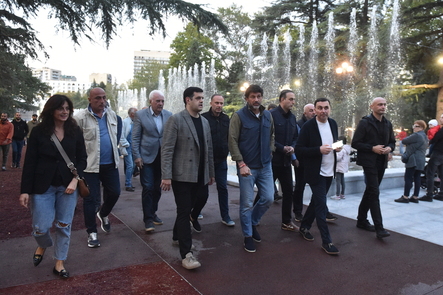 Children electrocuted in Georgia, construction company with corrupt past questioned

Three children were electrocuted on Thursday when they climbed into a fountain in the newly renovated city of Georgia’s capital of Tbilisi to retrieve a ball. The fountain was renovated by a company whose owners have already been convicted of corruption.

Tbilisi city officials during the opening of Vake Park. (Photo: OCCRP)A 13-year-old girl died, while the other two children were hospitalized, one of them in critical condition.

Vake Park – where the fountain is located – had officially reopened to visitors the previous day, October 12, after a two-year reconstruction project.

“A terrible thing has happened, it’s very hard for everyone,” Tbilisi Mayor Kakha Kaladze told reporters. “And the investigation, of course, will determine everything. Everyone, including me, will be held responsible for the crime. If I have committed a crime, I am ready to answer for it before the law.”

In October 2021, a company called LTD Greenservice+ won the contract to renovate the fountain for an amount of approximately 11.8 million GEL, or nearly $4.3 million. In accordance with the requirements of the project, the company submitted six inspection reports to the town hall. The inspections were carried out by private companies commissioned by Greenservice+. All the reports said that the job had been done correctly.

“The rehabilitation works were carried out in accordance with the design and cost accounting documentation”, indicates the report of the final inspection, carried out on August 25.

Greenservice+ won the project despite the fact that in 2018 it was featured in a report by Transparency International Georgia on companies that should be banned from participating in public contracts, as two of its owners have already been convicted of corruption.

In 2007, when Lasha Purtskhvanidze was a district governor in Tbilisi and Koba Kharshiladze was his deputy, in 2007 the two registered a company with a similar name, Greenservice LLC, in the name of acquaintances. The company proceeded to bid and win public contracts while its two secret founders served on the tender board.

Arrested for corruption in 2013, Purtskhvanidze pleaded guilty and was fined, while Kharshiladze was sent to prison for two years.

Nevertheless, Greenservice+, which the two registered in 2010, began participating in government tenders in 2013 – the year of their conviction – and has since won numerous government contracts worth millions of dollars, especially for the renovation of the fountain. Purtskhvanidze and Kharshiladze currently own 33% of the company’s shares.

On October 12, Mayor Kaladze, whose office issued the tender, attended the opening of the renovated park and made a statement to the press in which he singled out the work on the fountain.

“The second stage of work was the rehabilitation of the small waterfall and the round fountain, which was completed and turned out to be magnificent,” Kaladze said. “I’m sure that when the works are completely finished and the main waterfall is rehabilitated, it will be one of the best places to gather, relax and unwind. Also, since many people use this space, we have decided to add a special area for children, where additional new attractions will be set up.

On the day of the tragedy, information celebrating the opening of the fountain was quickly removed from the Tbilisi City Hall website.

OCCRP attempted to contact Greenservice+ director Lasha Purtskhanidze, but his phone was switched off. Later, the Interior Ministry announced that he was being questioned along with other responsible people.

Released on Friday evening, Purtskhanidze spoke to reporters saying the company had been in a fountain test mood for two months and no violations or issues had been observed.

“I really don’t want to say anything, the only thing I will say is that it looks like a pre-determined action, I can’t say anything else, the investigation will already determine that.”

At a briefing today, Deputy Interior Minister Aleksandr Darakhvelidze promised a thorough investigation into the tragedy. Authorities are interviewing people from LTD Greenservice+, city hall employees, teachers and other officials from Public School No. 55, which the children attended. Those responsible for their deaths would be punished with “all the severity” of the law, he added.

According to the tender contract, the Tbilisi Municipal Laboratory, the state agency that oversees construction and civil engineering throughout the city, was supposed to supervise the works to be carried out by Greenservice+. OCCRP attempted to contact lab director Lasha Samkharadze, but his phone was also turned off.

Omega Healthcare at 9% yield is too good to pass up