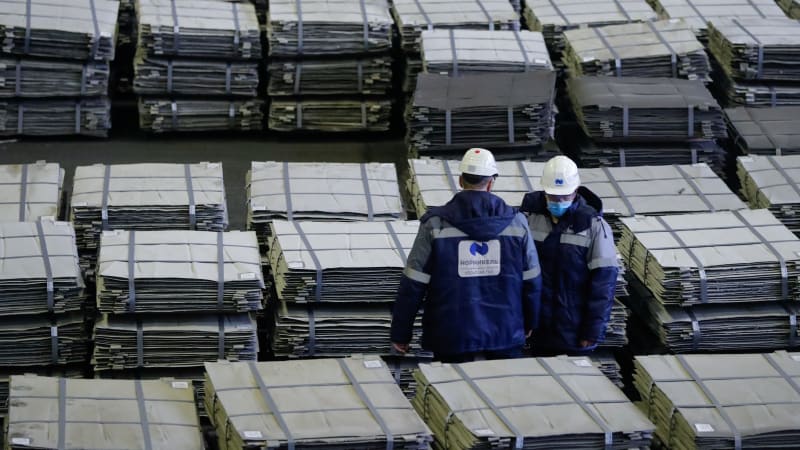 Sheets of nickel wait for shipment at Kola Mining and Metallurgical Company, a subsidiary of Nornickel metals and mining, in the town of Monchegorsk in the Murmansk region, Russia. Russia produces 20% of the world’s high-grade nickel, which is used in stainless steel and electric vehicle batteries. (Reuters)

LONDON — Saving for a new trip? Better to start putting more money aside.

Russia’s invasion of Ukraine is driving up the price of metals used in cars, from aluminum in bodywork to palladium in catalytic converters to high-grade nickel in electric vehicle batteries, and drivers will likely foot the bill.

While metals have not yet been targeted by Western sanctions, some auto parts shippers and suppliers are already shunning Russian products, putting added pressure on automakers already reeling from a shortage of chips and of rising energy prices.

“So what happens from here?” asked Carlos Tavares, chief executive of Stellantis, the world’s fourth-largest automaker, in an interview with reporters last week.

“First, what’s happening is we have escalating costs coming from raw materials and energy that’s going to put more pressure on the business model,” he said.

Aluminum and palladium both hit record highs on Monday while nickel, which is also used to make stainless steel, broke through $100,000 a tonne for the first time on Tuesday.

Andreas Weller, managing director of Aludyne, which makes aluminum and magnesium die-cast parts for car manufacturers, said his European business had seen a 60% increase in the cost of aluminum over the past four months, as well as soaring energy bills.

With annual sales of $1.2 billion and cost increases of “hundreds of millions of dollars,” Weller, whose company is based in Southfield, Mich., said he was forced to ask customers to pay more than the prices already agreed.

“Some are more understanding and cooperative than others, but we can’t survive without that,” Weller, who has four foundries and a machining plant in Europe, told Reuters.

Stellantis chief executive Tavares said ending the chip shortage could help automakers offset rising metal and energy prices, but he didn’t expect any resolution to the semi -drivers this year.

Consumers are already paying for the chip shortage as it has dented car inventories and driven up prices – even before rising metal prices hit the forecourt.

According to consulting firms LMC and JD Power, the average transaction price for a new vehicle in the United States was $44,460 in February, up 18.5% from the same month in 2021.

German automakers such as Volkswagen and BMW have already been hit by Russia’s invasion of Ukraine, which forced wire harness makers in the west of the country to halt production. A wiring harness is a vital set of parts that neatly bundles up to 5km (3.1 miles) of cables in an average car – and Ukraine is a key supplier.

And when it comes to metals, Russian companies are Germany’s main suppliers. In 2020, they accounted for 44% of Germany’s nickel imports, 41% of its titanium, a third of its iron and 18% of its palladium.

With production of 108 million tonnes last year, Russia is the world’s fifth-largest producer of iron ore, according to Credit Suisse, supplying European steelmakers who now face higher prices and possible supply difficulties. metal supply. Austria’s Voestalpine and Sweden’s SSAB are both exposed to this risk, according to US investment bank JPMorgan.

Voestalpine said it had sufficient inventory for the coming months, but expected to have to source raw materials from other suppliers thereafter. SSAB did not respond to a request for comment on supplies from Russia.

Faced with the choice of buying Russian products and indirectly financing the Russian invasion, which Moscow describes as a special military operation, the German steel and aluminum supplier Voss Edelstahlhandel has decided to draw a line.

“Even though aluminum is not on the sanctions list, it is being used by Russia to bring money into the country and so we have quit,” chief executive Thorsten Studemund told Reuters.

Russia is a major producer of aluminium, the most energy-intensive metal to produce, accounting for 6% of global production.

Caspar Rawles, chief data officer at specialist consultancy Benchmark Mineral Intelligence (BMI), said that while Russia accounts for 5% of global nickel production, it supplies around 20% of the world’s high-grade nickel.

The metal is used to make batteries for electric vehicles (EVs), posing a new challenge to automakers who are already investing billions to move away from combustion engines as demand for zero-emission models begins to take off.

Some of Russia’s high-grade nickel will likely end up in China, which likely won’t impose sanctions on Russia, but it all comes at a time when automakers are facing rising bills for other electric vehicle battery minerals, with demand outstripping supply.

“That’s the main concern in the battery supply chain in that you have record high lithium prices and very, very high cobalt and nickel prices,” Rawles said. “It just adds to the battery mineral issues.”

Batteries are one of the most expensive components in electric vehicles, and automakers are hoping they will become cheaper so they can offer more affordable electric cars.

BMW said it is focusing on recycling nickel from the battery as much as possible, with up to 50% scrap nickel used in the high-voltage battery of its new BMW iX model.

When it comes to palladium, automakers are also at an impasse.

The automotive industry uses it in catalytic converters for gasoline models – or platinum for diesel models – which still account for the vast majority of car sales.

Palladium prices have been rising for about six years and Russia accounts for about 40% of the global market.

Blasi estimated that the value of palladium used in the average car is around $200, but that could easily double.

“Either consumers will pay more for cars, or if automakers can’t pass it on, they’ll have to find cost savings elsewhere,” he said.