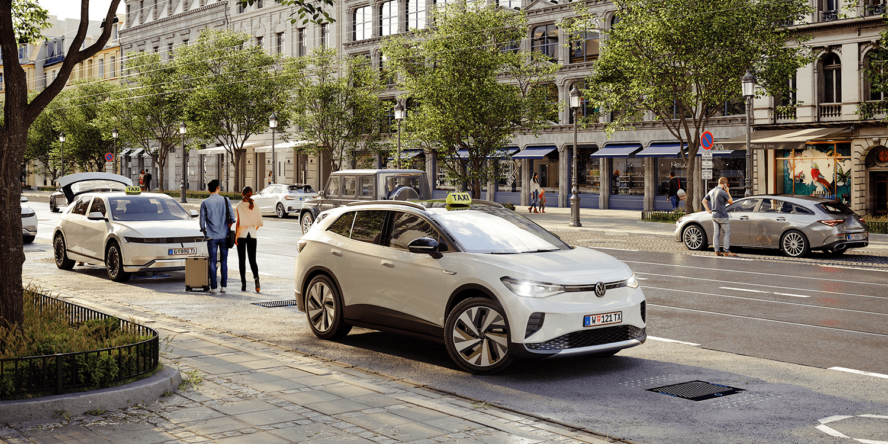 In Vienna and Graz, the â€œeTaxi Austria projectâ€ begins a large-scale trial to test a new type of charging station charging technology over the next two years. Electric taxis can be recharged with a connection to a charging station at the taxi rank. The approach holds great promise for fleet operators.

Unlike inductive charging technologies, Easelink’s charging process involves physical contact between the electric vehicle and the source of static charge through a connector that is lowered from the underbody of the vehicles and connects to the charging cradle in the ground.

The eTaxi Austria project is a completely Austrian initiative. A total of ten taxi ranks and 66 electric vehicles are being prepared for the project in Vienna and Graz. The conductive charging technology called Matrix Charging comes from Easelink, a company based in Graz.

AC output power of 11 kW with transmission efficiency of over 99% will be transmitted to Austrian taxi stations. Easelink said its matrix charging solution “would subsequently support up to 22 kW AC, 50 kW DC at 400 volts and 100 kW DC at 800 volts”. The VW ID.4 and the recently launched Hyundai Ioniq 5 will serve as pilot vehicles in Vienna and Graz. Easelink provides both models with a retrofit solution that â€œcan already be installed on most electric vehicles available on the market today,â€ says Hermann Stockinger, Founder and CEO of Easelink. In Vienna eight stands and 56 vehicles are being prepared for the project, in Graz there are two stands and ten vehicles. In addition, two classic HPC chargers are to be added to Graz “as a fallback level”.

The eTaxi Austria pilot project will run 66 fully operational taxis in an extended customer-focused pilot phase before the system is brought to market. The project will run until 2024, but already in that year the first series with the retrofitable version of Matrix Charging should also be available to customers. In addition to the upgrade kit, Easelink says it is currently working “with major car manufacturers and suppliers on a serial application of Matrix Charging.” In other words, new vehicles or vehicle parts will also be delivered with the solution ex works in the future.

Easelink does not yet wish to communicate prices to end customers. However, the Austrian companies promise that â€œthe cost structure of the technology will allow the use of Matrix Charging in all vehicle price segmentsâ€. Automated recharging will thus be possible beyond the premium segment and also in the volume segment.

According to Easelink, tests are already underway with car manufacturers and suppliers, infrastructure providers and fleet operators as part of cooperation projects. Since summer 2020, the system has already been used by an electric carsharing company in public spaces in Graz, and since this spring there is also a development partnership with the Austrian Automobile, Motorcycle and Touring Club (Ã–AMTC) . More recently, the charging system could be tested in an electric vehicle platform from supplier Schaeffler at IAA Mobility in Germany. At the end of last year, Easelink even signaled China’s interest.

The manufacturer is aimed at both fleet operators and individuals with its solution. But above all, all those who have to cover down time during their working hours. The taxi industry is ideal in this context because interruptions to journeys to the next charging station can thus be avoided. By eliminating cumbersome charging stations and cables, charging infrastructure can be deployed in densely built areas without requiring additional space. The company points out that the project allows year-round convenience for drivers and customers, such as cooling and heating electric cars at the taxi rank without reducing range, as well as simply moving forward and back to the wireless taxi stand.

Hermann Stockinger adds that the car park’s charging stations are robust and maintenance-free and can be installed in public spaces as well as in private garages. They can withstand a wheel load of up to 2.5 tons and have an automatic cleaning mechanism. In Vienna and Graz, charging stations are now placed directly at taxi ranks.

In Austria, the initiative is important as the Alpine nation does not want to allow zero-emission taxis until 2025. A whole consortium is behind the implementation of eTaxi Austria. In addition to Easelink, the core team consists of the Vienna and Styrian Chambers of Commerce, the energy companies Wien Energie and Energie Graz, the Energy Agency Graz, the tbw research companies GesmbH, Taxi 40100 and Taxi 31300 as well as ‘vibe move you’ and Quintessenz Organisationsberatung. The other partners involved are the Ã–AMTC and the car manufacturer Hyundai.

The project is also funded by the Austrian Climate and Energy Fund under the Zero Emission Mobility Implementation program. Of the projected project volume of 7.5 million euros, the public sector will contribute 2.2 million euros.

Within the framework of the cooperation projects mentioned above, Easelink can now point the finger at a number of supporters of its technology. Paul Gredler Oxenbauer, group director of charging solutions at the energy group Wien Energie, declares that â€œthanks to the decentralized construction of the charging infrastructure and the long connection time of the vehicles to the charging points, an integration in the service of the network in the urban power grid can be reached “.

And Christian Klejna, e-mobility expert at Ã–AMTC, reports that “our experience in testing Matrix Charging within the AMTC e-fleet has shown that Matrix Charging is ideally suited as a technically safe and robust solution for the eTaxi project. “.

Easelink has been working on its automated conductive charging technology since 2015 and has obtained â€œnumerous patents and trademarksâ€ in the process. The company currently employs 24 people and has sites in Graz / Austria and China. Easelink is also involved in several standardization bodies for charging technology, such as the Charging Interface Initiative (CharIn), the International Electrotechnical Commission (IEC) and the International Organization for Standardization (ISO).